All work and no play make Blake a dull boy

Assignment: A Story in a Single Image

The stresses of life can turn a lot of us into work-aholics.  I used to procrastinate on work anytime there was an opportunity to go outside.  Now it’s the other way around.

The picture above gets me thinking about the simplicity of life.  What’s more simple than going swimming?  In order to do it right though, you have to forget the worries and just walk out the door, a conscience, active decision.  There’s all sorts of things to be worried about and I find that it’s easy to obsess without even trying.  It’s so automatic, like breathing.  If I weren’t able to find a way to forget my troubles, then I’d be stuck in an office of some sort (coffee shop or at home on my computer) in my free time, or mentally knawing on some problem that has no immediate solution.  I’ve heard, from those much wiser than me, that it’s a scientific fact that worrying is counter-productive.  First of all…it’s stressful.  Stress doesn’t make us more efficient or effective and it certainly doesn’t make us healthy.  Second, if you are a writer, it’s just as important to get out and live as it is to lock yourself in your office for part of the day.  If we don’t spend time living and observing, then we can’t write believable characters or relatable stories that people would want to read about or watch.

I’ve been reading lots of scripts, writing up my comments,  working on this blog as well as a few other high priority activities since the TV production work started ramping down for the season.  Out of the frying pan…into the fire.  So I’ll take this opportunity to pay tribute to the good ‘ole swimmin’ hole which (Bonus!) gives me an excuse to get out of the house, visit a few and post the evidence.  Fiiiield Triiiip!  The cool thing about this idea is that I can take Snoop with me!  He’s getting cabin fever because we’ve lived in an apartment since the foreclosure and don’t have a yard to play in anymore.  I live in Austin, so, it should be an easy trip to plan.  I also have pictures of swimmin’ holes I’ve visited in the past that are a little outside of my day trippin’ range.  Here we Go! 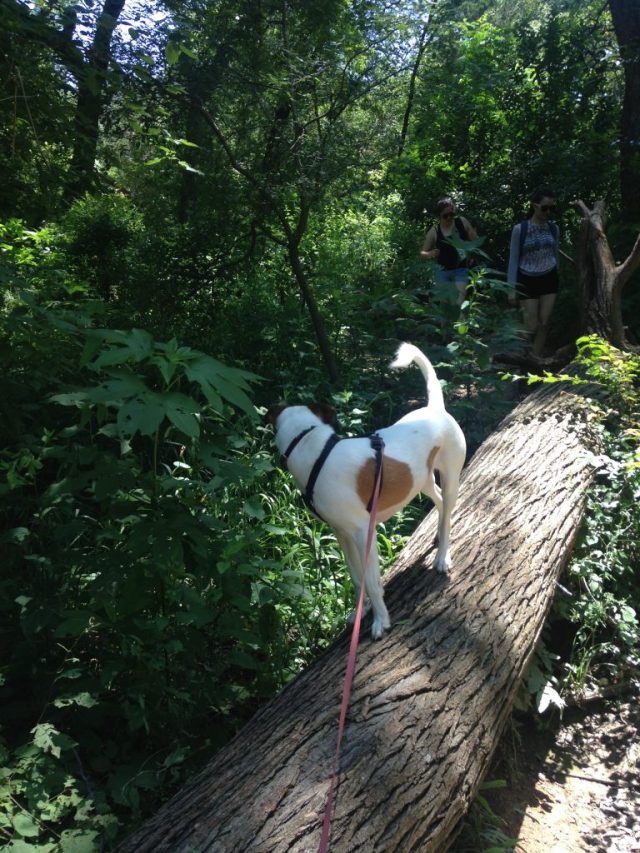 One of my boys, Scott, suggested Barton Creek @ 360 & Mopac.  Snoop loves this trail down to the water.  In spite of a ton of rain over the last 4 days, there were lots of Austinites with the same Idea. 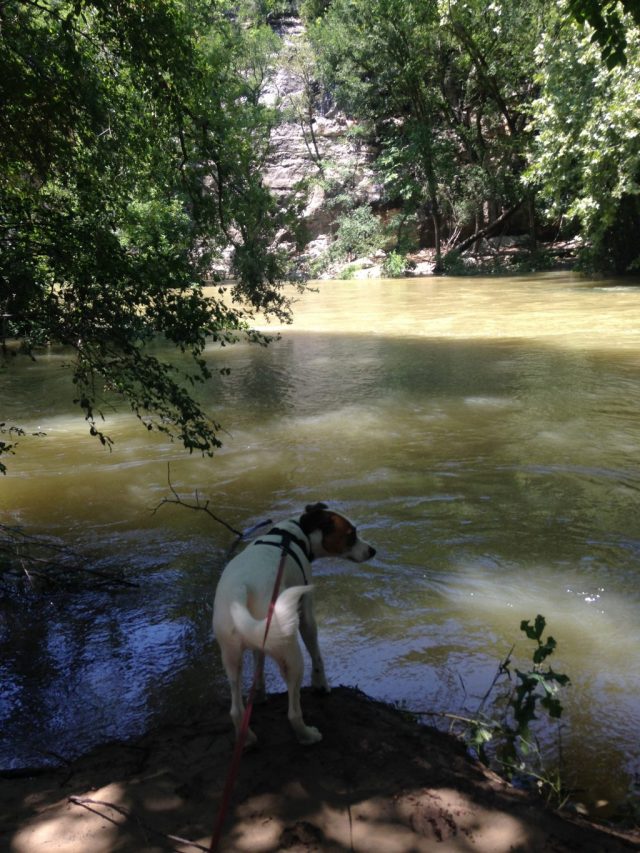 The trail was closed from the heavy rain but, we made it down to the water.  The water’s usually not this muddy.  This was the most open spot we could find for a photo.  The cliff in the background rises up about 100′ so it’s a pretty scenic spot.  There were two rock climbers up there scaling the bluff.  Cool swimmin’ hole but It’s gotten a little overgrown.  The county needs to get out there and clear the beach of all that excess foliage.  The water’s usually not this muddy.

My Girl Laurie suggested we hit Twin Falls next so, let’s roll.

To get to Twin Falls, you have to hike a long and, at times, narrow trail down to the bottom of the ravine.  Here’s the trail head way above the creek.  Snoop’s not afraid of heights. 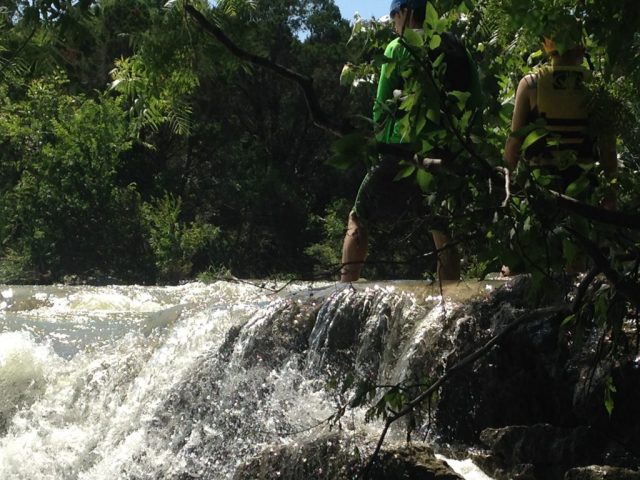 Long before the falls, we ran into lots of people hanging out creekside near these rapids.  Some were floating feet-first down the creek.  These guys had go-pros and were waiting for a couple kayakers to hit this small drop off.

Barton Springs Pool would have been next but Austin Traffic hit and I opted to avoid downtown.  Also, they’re not really dog friendly.  So on the next few pictures, I go statewide.  This is more of my own photography from Texas travels.  Shot in 35mm film.

Guadalupe State Park – This is a big swimming’ hole down river a ways from the main picnic area.  This was an awesome day because I went out not expecting rain and got pretty far from the parking lot.  When a storm cropped up (a BIG one), I freaked out a little because it was raining so hard and the narrow muddy path next to the river was so slippery, all you could do is find the nearest bunch of tree roots to sit and hold onto while getting drenched with lightening flying all around.  If you remember the warnings from when we were kids….under a tree is not where you want to be during a lightening storm.  But it’s either there or in the water.  This was one of those moments when you realize that even in a sticky situation, you’re tougher than you think.  Good experience for a those in a career path that involves taking risk.

Balmorhea State Park – Way out West down I10, if you drive long enough, you’ll find this oasis at the foot of the Davis Mountains.  It’s built up around the edges like Barton Springs pool in Austin but just like Barton, this is a spring fed natural pool with a natural rocky bottom and all sorts of fish swimming around in there.  If you ever make it to the mountains, you’ll want to make sure and stop here for a dip….or scuba lessons.

This is taken from some vantage point up in the Davis Mountains.  Technically, this isn’t a swimming’ hole but that sheet of rain coming down in the background looks like enough water to make you think your swimming.  Just a cool shot I thought I’d use to book end the blog.

Well, there you have it….swimmin’ holes.

I hope your day is going well and you all take time to pay tribute to the cool stuff in your neck o’the woods.  Don’t work too hard.

Blake is a Filmmaker, Writer, and Sports Media professional from Austin, TX. He studied Film Production and Advertising at UT Austin. When not supporting NBA Entertainment on live sports productions, he likes to train Krav Maga, travel, and collaborate with other creatives on visual storytelling in the film/TV medium.
View all posts by RealBlake →
This entry was posted in Challenge: Everyday Inspiration and tagged #everydayinspiration. Bookmark the permalink.