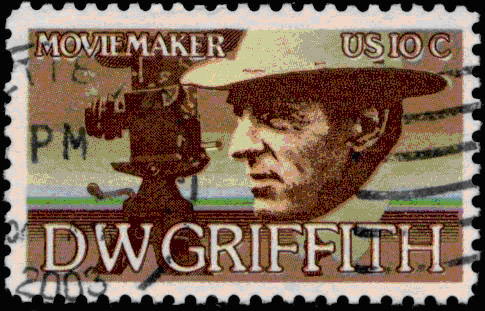 The rules:
Thank the person who nominated you. Thanks Bharath

Nominate 3 bloggers to participate in the 3-day Quote Challenge. @layeyeblog

Post 1-3 quotes each day for 3 consecutive days. Quote #3 coming up

[on sound movies] It is my arrogant belief that we have lost beauty.

Griffith started making movies in the silent era.  The major difference between the then, new storytelling format and the theatre, was that the flexibility of camera perspective meant that instead of people sitting in front of a stage (bring the people to the stage) you had a camera moving around to capture whatever perspective the director wanted (bring the stage to the people) for each individual shot.  After working with the technique of editing for a decade or two, directors learned how to manipulate the audiences perspective by combining images in different ways and this solidified film a “visual medium”.  In contrast, theatre involved a lot of dialogue and heavily weighted the performance technique of the actor (and still does).  This is why, in the quote above, Griffith laments the invention of sound films.  Even though we use lots of dialogue in movies today, the nuts and bolts are the same as when Griffith discovered the language of film one hundred years ago.  The addition of the sound element is a relatively small change.  The craft of screenwriting still distinguishes itself from playwriting in that the story needs to be told visually.

When I submitted my script to a college instructor one year, she told me that I couldn’t move forward with the production because it was too “talky”.  It’s a strong criticism that I was forced to deal with by figuring out a way to make it more “cinematic”.   In the end I did so, in spite of its talky, theatrical form.  Thinking like Griffith, is a good reminder of what  about movies (and even the most popular novels of the 19th century) that people relate to…it’s about the images.

Blake is a Filmmaker, Writer, and Sports Media professional from Austin, TX. He studied Film Production and Advertising at UT Austin. When not supporting University TV crews and NBA Entertainment on live sports productions, he likes to excercise, travel, hang with Snoop his Jack Russell, read, write and collaborate with other writers, directors, actors, editors and producers on new ideas for storytelling in the film/TV medium.
View all posts by Blake →
This entry was posted in Other Challenges. Bookmark the permalink.