Day Eighteen: A Series of Anecdotes 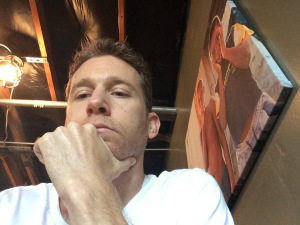 I was still one year away from hiring age, so had to resort to mowing yards if I wanted to earn more money than my allowance gave; that or go back to lumber-jacking on the farm, which was one of the hardest, hottest, exhausting, sweaty and risky jobs one could imagine.  I was a budding adrenaline junkie in my youth so the risk didn’t bother me.  In fact, it was exhilarating; cutting into a 100 foot tall pine tree while listening cautiously for the tree to sound it’s warning of snaps and cracks before the entire trunk buckled on its own base, coming down with so much force that it jams its branches so far down into the dirt that the entire tree trunk settles 10 feet above ground, creating an air bridge that you can walk on (if you dare) with the growling chain saw in your hands.  Limbing a giant tree as you walk on top of the 10 story natural skyscraper is definitely a bucket list item.  But, wearing kevlar chaps, earmuffs and a hard hat in 100+ degree heat during a drought year in a forest full of briar patches, mosquitos and biting flies with every exposed centimeter of skin caked in deep woods off is no party…so I went with the lawn mower.

The next weekend, we went back to the scene of the accident to survey the damage.  A pretty large section of the field was charred black but fortunately the fire truck got to it before it could spread throughout the neighborhood and threaten peoples homes.  It sounds unbelievable that it would take a mistake of that magnitude to learn responsibility but it does…particularly when egos are involved.

Blake is a Filmmaker, Writer, and Sports Media professional from Austin, TX. He studied Film Production and Advertising at UT Austin. When not supporting NBA Entertainment on live sports productions, he likes to train Krav Maga, travel, and collaborate with other creatives on visual storytelling in the film/TV medium.
View all posts by RealBlake →
This entry was posted in Challenge: Everyday Inspiration, High School Years and tagged 1990's, fireworks, high school, summer, teenage years, Tyler Texas. Bookmark the permalink.