Challenge: A Series of Anecdotes 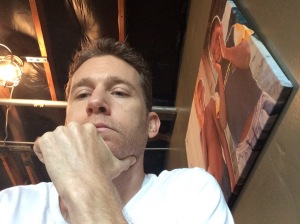 I don’t remember exactly when I snuck out of the house for the first time, but I do remember that it was definitely not high school.  The occasion is a little fuzzy but I think I was spending the night over at a friends house with a few other guys and it was a night after some school event; maybe a Hubbard Huskies football game or a school dance or something like that.  The school dances were kind of cheesy, even at the young age of 14.  I think it may be because dances as social events are so traditional.  The tradition is old enough that the distance between it and contemporary culture is so great that the formality of it is a anachronism, which is a quality that teenagers hate with a passion.   On the rare occasion that we did decide to attend, my friends and I wouldn’t stick around too long.

The mission that night was to wrap Leslie Blanchard’s house.  Leslie didn’t live anywhere near our host, and being 14 it was necessary to get a ride everywhere we went.  It was only two years prior that the horizons of our adolescent world had expanded beyond the boundaries of a neighborhood, navigable by bicycle.  So, you may wonder, if the target was not within walking distance, how would it be possible for a band of unruly teenaged boys to get to the store, purchase the quilted cotton ammo and then proceed to the home of the unsuspecting huskyette?  Without the broader context of the teenage tradition of doing things you’re technically not supposed to do, this small transportation detail might lead the overzealous helicopter parent to believe the plan was derailed before the first role of toilet paper could get within range; but not so.  We made it to Leslie’s house courtesy of, non other than,….a mom… who also funded the endeavor.  We were stealthily dropped a couple houses down from the yard that would soon have about 6800 feet of super white two ply draped from the tops of it’s shade trees.  Then the soccer practice/getaway driver took off and went around the block.

With traditions, there’s usually some kind of ceremonial act that kicks off the festivities, even if it’s as simple as the word “go”.  In the East Texas culture, it’s common to have a leader of sorts…like a master of ceremonies who is possibly the most popular kid or maybe the most assertive [probably not too different than other corners of the vast cultural kingdom of Americana].  At the risk of getting technical, I’ll note that the act of wrapping a house is a comunal experience…as is the act of sneaking out to go do it.  Therefore you don’t want to slip up and break any unwritten rules, screwing up the tradition.  We were kids, so usually stuck with the K.I.S.S methodology (Keep It Simple Stupid).  There’s no goofy speech like what you might find in 1980’s movie plots that focus on youth experiences, but this traditional rite of passage, like other traditions had a ritualistic nature to it that was just understood.  Like many rituals, this one had to be initiated by the leader, whose activities start with the break from the huddle one house over, a swift charge up to the yard of interest, bookended with the hail Mary toss; an act that signals the “fire at will” command.  At this point all hands are on deck and with each throw we all attempt to outdo the last.  This is important because if you get the roll higher and put the right amount of “English” on it, you can get more than half a roll deposited onto the tree which means, overall, fewer throws and a faster execution.  The goal was to get in and get out…undetected.  If a team member executed a bad throw that hit the tree on the way up and bounced off, or, erred in the other direction missing the tree all together, there was hell to pay in the form of adrenaline laced insults.  The worst form of failure was a weak toss or the wobbly toss.  These were shamefully unacceptable.  The team was on point that night and we finished up quickly as the Chevy Suburban pulled around the corner.  Somebody whispered loudly..”Let’s Go!”, and we ran back to the street and piled in, expecting our “evacuation specialist” to peel out and put distance between us and the scene of the crime as quickly as possible.  But, since our thirty-something driver had not seen as many heist and Stalone flicks as us, she turned around as if it were Thursday night soccer practice and, with a spirited sincereness, inquired as to how it went.  After our host urged a speedier exit with a hearty “Mom! Let’s goooooo!”, we safely pulled away from the curb and progressed at a moderate speed back to the HQ for what would be the last “unofficial” sleepover of our youth.

There were other rituals in my East Texas town that were so popular they were pretty much sanctioned by everyone [except the police]; but that story will have to wait.  In hindsight, I can’t help but wonder if Leslie and her parents were tipped off about the impending caper.  I haven’t spoken to her in over a decade, but even though she was a good natured person, I sometimes wonder if she holds any contempt from the multiple hits on her house that year combined with the incident from three years earlier where I upstaged her in our fifth grade piano recital when, as the last note of my highly inspirational piece decayed into the dead silence of the Andy Woods Elementary School cafeteria…a rustling began…quickly followed up with cheers…bringing down the house with applause.  Their response to Leslie’s performance right before I took the stage had been luke-warm at best.  She played Beethovan…I played Eye of the Tiger.

Blake is a Filmmaker, Writer, and Sports Media professional from Austin, TX. He studied Film Production and Advertising at UT Austin. When not supporting NBA Entertainment on live sports productions, he likes to train Krav Maga, travel, and collaborate with other creatives on visual storytelling in the film/TV medium.
View all posts by RealBlake →
This entry was posted in Challenge: Everyday Inspiration, High School Years and tagged #everydayinspiration, boys will be boys, hometown traditions, Hubbard Middle School, teenage boys, teenage mischief, teenage years, Tyler Texas. Bookmark the permalink.